I would make them all learn English; and then I would let the clever ones learn Latin as an honour, and Greek as a treat.
​--Sir Winston Churchill

Learning Latin or Greek is well worth the effort. Classics majors have a higher GPA at the college level and have accelerated performance in nearly all other subjects such as math, music, and history. This makes them appealing as first choices for law and medical schools as well as all degree programs in the humanities. While there are advantages to mastering any language, Classical languages pay the highest dividends. There are many modern studies on the rewards these languages offer those who master them. Benefits include English excellence, linguistic brilliance (the ability to quickly master additional languages), plus an increasingly  analytical and logical mind. "Employers highly value what humanities majors learn in college, focus groups and surveys show. More than nine out of 10 say a job candidate’s capacity for thinking and communicating clearly and solving complex problems is more important than his or her major," [source and source].  Building brain power and linguistic intelligence are  fantastic side-effects of Latin and Greek, but the main benefit is the ability to read, enjoy, and appreciate the literature of the Greeks and Romans. Questions of good & evil, valor & cowardice,  democracy & tyranny, and the basics of a good moral compass are all explored deeply by Classical authors.  "Classics teaches students not only how to think, but also what is important in life to think about" [source].  A background in the Classics is more relevant than ever.

Check out our blog,  The Right Kind of Ancient Greek: Which Version of the Greek Language Should I Learn?
​
"Mr. Barr, I am a former student of yours. We met in person a few times at the homeschool convention... Anyways, I wanted to thank you for the language and writing classes I took through you all at the Lukeion Project in high school. I'm now into my second semester of college and so far I'm doing well, partly because of your classes. In Lukeion, you didn't just teach me the subject, you also taught me how to learn. I learned a good work ethic, self-discipline and gained the confidence that I can learn hard academic subjects. So I just wanted to say thank you, and tell you that I am very grateful for the teaching I received." ~A.N., former Lukeion student

Why take Greek with The Lukeion Project? 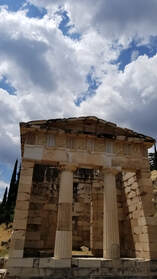 START HERE:  Why Learn Latin or Greek with The Lukeion Project?
​Our Greek program is geared for those working at high school level and above. There are many language products on the market targeting home educators. Most of these are designed for teachers who have little experience with a Classical language and no time to master one. While this sounds like an appealing feature, the end result is often years of workbooks and busy work with no appreciable gains in language skills. After hours of drills, chants and worksheets, many students have no idea how to use a dative, subjunctive or participle, much less how to translate real Greek. Two or three years in these drill-type programs often provide learners no more than a scant couple of month’s head start over peers who have had no Classical language at all. The very basic, simplified approach of koine Greek is highly attractive to those who are nervous about teaching such a complex subject.
The majority of these highly simplified approaches to Greek will not pass muster on the National Greek Exam, nor will it suffice if a student wishes to pass directly into second year language at the college level. Success on these exams can mean improved admission rates to college, scholarships and hundreds of dollars saved by testing out of college language courses. All national and college exams are based on the Classical languages, not on later and medieval forms. Simply put, learning Classical Greek permits a student to master all periods of the ancient Greek language. Learning only koine Greek limits full mastery and comprehension.
We offer 6 years of high-school level Greek.
Our Greek III course is an intermediate surveys of authors while Greek IV is an advanced readings course. A fifth and sixth year are available as independent studies.
Our unique classroom environment is highly visual, interactive and engaging. Each session offers a fully illustrated explanation of the new material and review of older material. Our classroom allows each student to participate fully during class, ask questions about new material and respond during fun but competitive drills. Each Greek level has access to specially developed games that help students practice the material painlessly. Homework is credited and quiz translations are graded by the instructor.

Due to time constraints in our live Greek classes, we recommend that all Greek 1 students register for our Meet the Greeks Workshop during their first semester:
​Meet the Greeks Workshop  -- recording only, autumn semester
​​​*Available mid-September-December 1. The Greeks were one of the most influential cultures in the development of western civilization. Many inventions & innovations that we think of as "Roman" were actually discovered by the Greeks first. After Alexander, many parts of Greek culture were spread from India to Spain, from Egypt to Great Britain. You'll be surprised how much began among these creative people! Workshop includes art, culture, history & society.  Perfect introduction for anyone studying the Greek language. Working on World History? This is much better than the few pages you’ll find in your textbook. ​We expect students of all ages for this class.
[View all our other workshops]

Greek 5, 6, 7 Independent Studies (limited or no synchronous meetings)
Advanced Greek students may continue their Greek studies by choosing from the following independent studies courses: Homer's Iliad and Odyssey; passages from The New Testament; or selections from Greek Tragedy. Students need instructor approval to register for these independent studies courses unless they successfully completed Lukeion Greek IV. Translations are set to schedule but students are flexible to work ahead throughout the semester. Advanced independent studies are an excellent to keep one's Greek translation skills fresh and in tune while one finishes high school.
​Contact instructor Regan Barr

​What age is right to start Lukeion Greek?

Those who teach modern spoken languages generally agree that the earlier children begin to learn a spoken language, the easier it will be for them to achieve native or near native proficiency. Partnered with the first notion is the idea that students who begin language later will have a more difficult time and limited success.
This theory was first put forth in a 1967 study which outlined the idea of critical windows for language acquisition. This 40-year old hypothesis which passes as fact in some circles effects the decisions that we make about when it is best to attempt a new language, and when we should abandon hope for achievement.
Since we only offer Latin for students working at the high school level at The Lukeion Project, parents ask if their older child (12-18) is going to be at a disadvantage for starting Latin so "late" or, conversely, if there is an advantage for children to begin a study of Latin during the elementary years. In addition, many adults have an interest in learning Latin and fret about their abilities to "keep up" with younger language learners.
It is not only 'ok' to learn Latin after logic and maturity kicks in (usually age 12-15, the time varies for each child) but it is actually preferable.
A 1967 study proposed that the human brain was equipped with learning windows for speech, reading, writing, and learning the sounds of a language. Any good parent knows that children are powerful mimics at a young age and this study confirmed that hunch. The researchers in this study proposed that the learning window snaps shut at puberty. This assertion has had a big impact on education in America, especially as parents blame themselves for missing THE window, and older learners at college and beyond gave themselves the excuse to quit language studies prematurely.
While the "critical period" hypothesis is now spouted as truth, detractors have been successfully poking holes in this theory for the past 30 years. More recent research in neurology has demonstrated that, while language learning is different in childhood and adulthood because of developmental differences in the brain, "in important respects adults have superior language learning capabilities" (Walsh and Diller, 1978). The advantage for adults is that the neural cells responsible for higher-order linguistic processes such as understanding semantic relations and grammatical sensitivity develop with age. Especially in the areas of vocabulary and language structure, adults are actually better language learners than children. An experiment in 1973 with a group of American English speakers learning German, showed that adults did significantly better than children after 10 lessons. Another study in 1978 not only confirmed the first study (this time the language was Dutch), but added that twelve to fifteen year old adolescents scored the best, the adults came second, and children less than ten years old ranked the last.
Regardless of our ability to soak up a native-sounding accent, our brains are not equipped to think analytically about language and complex grammar until we are somewhere between the ages of 12 to 15. So even if a child works at French (or whatever language) from a fairly young age, he or she will not normally master complicated French grammar or read sophisticated French literature until he or she reaches the formal reasoning stage between ages 12 to 15.
So even if mastery of proper accent can only be achieved at a young age (for which there is diminishing evidence), remember that Latin and Classical Greek are not usually taught as a spoken languages. They are intended to be read. Having an accent like Sophocles or Caesar seldom make the list of reasons to take Latin or Greek. This is not to say that starting Latin or Greek at age 7 or 8 will do damage to a language learner (unless it is taught so that a student becomes bored or resistant) but the hard work of comprehension and translation will not usually take place until after he or she is 12 or older.
The cognitive advantages to taking Latin or Greek later are numerous but mastering organization, self-control, and self-motivation are other good reasons to wait for a bit of maturity. Finally, a more mature student is better equipped to communicate well with the instructor and ask insightful questions.
If you have a student aged 13 or 14 or older...or if you as an adult would like to take these languages, rejoice! 'Older' is the perfect age to start Latin or Greek at The Lukeion Project.

I want my student to take both Latin and Greek. Should a student start with Latin or Greek first?
In general, we find that students are less intimidated by starting with Latin simply because there is no new strange alphabet to master on the first day of class (or earlier) as is the case with mastering Greek. Some students are actually drawn to Greek because of that very same alphabet! If a student has a preference, let him or her start with that language. If not, let him or her start with Latin.
Greek is only more complex due to the novel alphabet and the need to master accents from the start. In the end both languages serve each other well and the second one will be much easier. We do recommend that students wait at least year before starting the other so that first years do not overlap. Our brains are certainly capable of learning both languages at once! It is best to stagger your start.